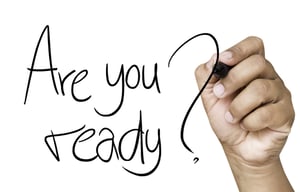 The NOAA (National Oceanic and Atmospheric Administration – the scientific agency within the US Department of Commerce that focuses on conditions of the oceans, waterways and atmosphere) predicts a 70% chance of 9-15 named storms, being defined as ones with winds > 39 mph.

They also predict, for this year, 4-8 hurricanes and 2-4 major hurricanes that are Cat 3 or higher.

How that compares to the typical year?

The average hurricane season has 12 named storms, 6 hurrricanes and 3 major hurricanes. So that means NOAA has predicted a near-normal season for 2019.

How does this compare to last year?

2018 was considered to be pretty destructive. We had 15 names storms and 8 hurricanes. Two of them – Michael and Florence – were major hurricanes that caused over $50 billion in damage to islands and the mainland. 2018 ended up being just slightly more active than the NOAA”s prediction for the season, which was up to 13 named storms, 4-7 hurricanes and 0-2 major ones.

Also notable is that after a seemingly-long period where we didn’t have that much activity (at least, to those of us who remember the historic seasons of 2004 and 2005 when it seemed that there was always a hurricane around the corner), we’ve now had three consecutive above-average hurricane seasons. Will 2019 break that streak or continue the trend?

What influences These predictions?

For this year, the NOAA's prediction takes into account ocean water surface temperatures in the tropical Atlantic Ocean and Caribbean that are warmer than average. Water temperatures contribute to hurricane formation and strengthening because warm water evaporates into the air, giving the storm the fuel that it needs to strengthen.

However, that’s not the only thing that affects hurricanes. Wind shear (something you hear the people on the Weather Channel talk about) is a term used for changes in wind speed and wind direction (which can happen in both vertical and horizontal directions).  Contrary to what you might think, a high amount of wind shear can weaken and/or break up hurricanes before they form or get stronger because the erratic wind behavior basically breaks them apart as they’re trying to stack up and form and get bigger.

Back to today……we have an ongoing El Nino weather pattern out in the Pacific, and its effect is expected to help blunt the strengthening effect of the warm Atlantic/Caribbean sea waters by increasing wind shear, potentially tearing apart or weakening some of these predicted storms before they get really bad. So the two effects are expected to cancel each other out to a certain extent.

Many times, hurricanes  they happen later in the season, so if you haven’t prepared for them, you’ve still got time.

So we’re about 6-7 weeks into season with 3 months left to go. If you haven’t done much preparation, have you dodged a bullet?

So far, our 2019 tally is 2 storms and 1 hurricane, Hurricane Barry.  And even Barry was relatively mild, only reaching a sustained wind speed of 75 mph (and that for only 1 minute of its lifespan).  The season seems like it’s started off pretty mild, confirmed by the fact that there were no storms formed during the month of June.

But don’t be deceived here. The same thing happened last year – there were no storms formed in June 2018, and we still ended up with an above-average season. Both Florence and Michael hit us after the start of September. Major hurricanes most often form later in the season. This is borne out by the historical data going all the way back to 1851 (!), which clearly shows August, September and October being the peak months. 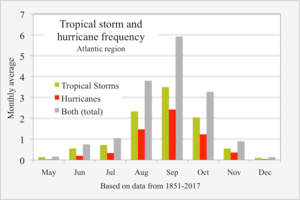 What To Do Now?

There is good news in all of this if you think you still have things to do to get ready.  You still have time this season to check your stored fuel and make sure you’re ready for the season.  Do it now before the hurricane season really gets ramped up.

You will probably also want to do a microbe test on your stored fuel. Given that all stored diesel fuel (even the off-road diesel fuel) is now ultra-low sulfur diesel, there’s been an explosion in microbial problems. Microbial testing is the best way to define if you’re likely to have problems with that.

Of course, if you want to really hammer the best practices, a more comprehensive battery of tests that include microbial content, stability, water and sediment, and other essential specifications listed in ASTM D975, that would be the best thing for you to do. Those kind of diagnostic steps aren’t that expensive to do if you hook up with the right partner who can note only give you good advice on what to look for, but who may also

And now is the best time to take care of heading off any potential problems. There’s still time before the big future storms hit, if you administer an ounce of prevention now for your mission critical fuel.