Choosing A Fuel Biocide For Your Farm: How Do Bellicide and Biobor Compare?

With the differences between farm fuels of today and the past, fuel biocides are an essential and necessary part of the arsenal employed by agricultural professionals to kill microbes in farm fuel and keep away the problems that they cause. Across the nation, more and more farms and co-ops are checking their tanks and beginning to realize the extent of the microbial problem in their stored fuel – the modern ultra-low sulfur diesel fuels don’t resist microbes like they used to, and many of their storage tanks now have big problems with microbes.

So they go looking for something to solve the problem, which brings them to this biocide chemical.  But which to choose? Not all biocide chemistries are the same and there are major differences in performance that are important to consider. And that’s the thing - you may not even know what a biocide is (at least you didn’t before you arrived at the Bell site) and you definitely may not know a Biobor from a Kathon from a Bellicide. Aren’t they all the same? No, they’re not, which is why we’re here to give some insight on how two of the major players (Biobor JF and Bellicide) compare in important areas that farms and agriculture need to pay attention to.

Biobor JF – The biggest name on the market

The most well-known biocide out there is Biobor JF, manufactured by Hammonds Industries.  It’s been around since the early 1960s and touts numerous engine and equipment manufacturer recommendations.  As such, there is a perception among consumers that Biobor JF is the best because it may be the only one they can recall hearing about. A big reason why it’s well known is that it was the first biocide that was universally approved for use in jet fuel. This is where the ‘JF’ comes from.  To their credit, its manufacturers have done an excellent job of leveraging this into both additional recommendations and market recognition.

Market share and effectiveness do not always go hand-in-hand.

In order to make the right choice, it’s essential to know what makes a good biocide.  You should consider these characteristics:

Resistance to pH changes - The best biocides will work equally well in both acidic (pH < 7.0) and basic (pH > 7.0) environments.  Maintaining effectiveness in acidic environments is especially important because fuels and liquid with severe microbial contamination will tend to be acidic, due to the acids produced by microbial respiration as they grow and thrive in the liquid.

Effectiveness in both fuel and water phases - This is essential when using a biocide in stored fuel that has a water layer at the bottom - which, ironically, is all agricultural fuel storage tanks that have microbial problems. The presence of a water phase (a layer of water under the fuel) is always associated with microbial growth because microbes need the water phase to grow and thrive.  The treatment recommendation under normal circumstances is to add the biocide to the top fuel layer. Over time, the biocide will partition or move in between the fuel layer and the water layer, killing all the microbes in its path.  This is how they’re supposed to work. Yet, some biocides react with water when they reach it, becoming less effective as their active ingredient is changed into innocuous by-products.

Let’s compare  Biobor JF to Bellicide (the biocide from Bell Performance) with respect to performance in these critical areas. 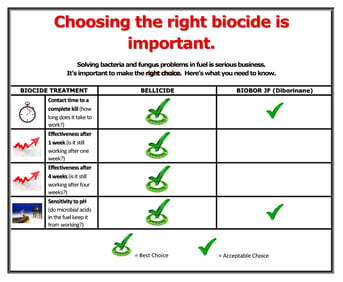 Sensitivity to pH – Bellicide and Biobor JF are two of the better biocide chemistries in the marketplace that are least sensitive to pH levels of fuel or liquid.

Effectiveness in the water phase – This is a big difference. Biobor JF, in stark contrast to other biocide chemistries including Bellicide, loses effectiveness in the presence of water.  In fact, it is well known within the industry that Biobor JF undergoes a chemical reaction when it comes into contact with water (as in what would happen in a farm fuel storage tank). This is documented in its technical literature on file with the EPA. This reaction degrades Biobor JF’s active ingredient into “non-biocidal” by-products, reducing its effectiveness once it moves into the water phase of a tank.

How effective is Biobor at killing microbes?

Because the purpose of a biocide is to kill microbes, it’s important to look at how effective they are at killing microbes and maintaining a microbe-free environment for as long as possible. We can see some interesting things if we look at some comparative kill studies using different treat rates and different strains of microbes.

This seems to be a lot of data to cull through, so here’s the summary.  Bellicide (the blue) killed everything, even at the lowest treat rate, all the way through the full 4 week period. Biobor JF (the red) stopped being effective before 4 weeks at any of the treat rates and was not even fully effective after 1 week in some of the samples.

What should we conclude about Biobor and Bellicide?

Since farms operate on such tight margins, they need to make sure whatever they use actually works and works well. So what it comes down to is this: Biobor is the most well-known biocide out there.  It’s the one most likely seen in farm co-ops. But in our opinion, based on the objective evidence, Bellicide is the better biocide choice for solving microbial problems in agricultural fuel situations.

This Year's Prediction: Get Ready for a Busy Hurricane Season
Important Reasons Not to Ignore Sludge and Biomass in Farm Fuel Storage Tanks
The 3 Elements of Agricultural & Farm Fuel Contamination
Fuel Contamination can be Avoided with Clean Fuel and Sound Practices