When Is Engine Oil Consumption Considered Excessive? James on Engines #6

Bell Performance's master mechanic James Dunst gets more than a few questions from the automotive public on aspects of lubricating oil.  What's the best kind, how often should you change it, that kind of thing.  One topic that seems to be on their minds is oil consumption - how much is too much and when should it be concerning?

So today, James Dunst gives a mechanics' eye view on the topic of normal vs. abnormal oil consumption for your vehicle. 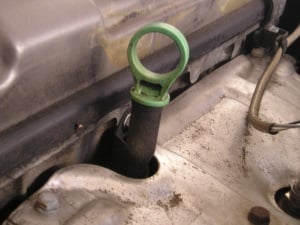 It is a fact that most engines will burn some oil. The majority of manufacturers consider one quart of oil in the range of 1,500 miles to be acceptable.  It should also be pointed out there are some performance vehicles that will consume a quart of oil in less than 1,000 miles and is also considered acceptable.

With the consumer demand for more fuel efficient vehicles, there have been a couple of engine changes that influence the answer to this issue.  These changes have affected the amount of oil an engine will consume by burning it and still be considered acceptable.

Another change that has affected oil consumption is the move to lighter motor oil.  Oil use in the marketplace is shifting towards lightweight grades like 0W-20 to reduce friction and to better lubricate internal engine components in cold weather. This lighter oil has a tendency to get by the piston rings and into the combustion chamber. The use of these lighter motor oils has resulted in oil escaping through oil seals and gaskets, which is usually not a problem with heavier weight motor oil.

Standard motor vehicles that are consuming a quart of oil in less than 1,000 miles should be examined for the cause. Extremely high oil consumption, like one quart in 500 miles, can have a negative damaging effect on catalytic converters.

Check out other posts by James: