Hollywood does love a good underdog story. Make it a racing story and Hollywood loves it even more. Those of us old enough to remember, first-hand, the events covered by such biopics, they resonate with us in ways that other kinds of stories can’t. The real-life events have all the elements that a great dramatic story has – drama, intrigue, suspense and interesting characters that may be larger than life. 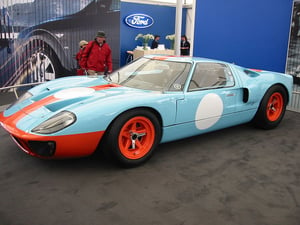 The thing is, these Hollywood re-tellings don’t always stick to the facts. There’s always a bit of poetic license taken because they’re trying to balance the attractive elements of the story itself with the needs of the visual medium that is cinema. And yet, sometimes the actual truth is more entertaining than the partial fiction that was created to tell it.

So it goes with this year’s Oscar-contending film Ford v Ferrari, which tells the story of the Ford Motor Company’s race to dethrone one of the foundational automotive icons of our time, Ferrari. But not in auto sales, but in a more “driven” arena – auto racing.

In the late 1950s and 1960s, Ford was in a difficult position. They were no longer the same dominating force in the American automotive industry that they were when Henry Ford made 80% of all the cars sold in the US. Ford was lagging behind other companies; they were not the industry leader. And Henry Ford II wanted to change that.

Here’s what happens in quick summary. Lee Iaccoca (Ford’s marketing director – remember him?) knows that Ford cars aren’t particularly highly regarded. He comes up with a plan to make them young and sexy again…..start a racing team (which they didn’t have), create a race car from scratch, and enter and win the prestigious 24 Hours Of LeMans race. But not only that, they have to do two impossible things. Create a winning car in just 90 days, and beat Ferrari – the icons of the sport who had won the previous 6 straight years.

Ford hires now-legendary designer Carroll Shelby (Matt Damon).  He gets the job done with the help of British racer Ken Miles (played by one of the great actors of our time, Christian Bale).  Mix in a heaping helping of dramatic suspense and overcoming-of-corporate-toadyism, and the story of Ford’s improbable slaying of the Ferrari giant is complete.

While all of that makes for great and entertaining storytelling, it’s always good to revisit the real life basis for it. Sometimes we find out that the truth is just as entertaining.

Henry Ford II was the grandson of THE Henry Ford. He’s portrayed in the movie as a mix of a “captain of industry” + somewhat neurotic rich guy. He was the one who gave the go-ahead for the plan. But why? His motivations were part pride and part “youthful yearnings”.

The pride came out of rejection – some years earlier, Ford had actually had an acquisition offer to purchase Enzo Ferrari’s company. Ferrari rejected the offer in an insulting manner, giving “Hank The Deuce” the motivation to say either “All right, we’ll beat his ***,” or “We’re gonna bury that greasy ***.” Depending on which version you want to believe and how sanitized you want it to be....

The youthful yearnings slant came out of a recognition that part of Ford’s problem in the domestic car market of the time was they just weren’t regarded as cool anymore. Lee Iacocca pitched Ford joining the European racing circuit as a quick way to change the company’s image and reestablish a more youthful vibe that would resonate with younger car buyers that would be the key to their ongoing success.

Any good story like this needs to have lots of drama. Some of it gets magnified to help the storytelling of the movie. And some of it is just as it's presented.  Part of the movie centers on meetings that Ford had with Ferrari, held in secret, to prepare for Ford to purchase Ferrari (who had been leaking money for years).  The movie portrays Lee Iacocca as the main spearhead of these meetings, but in reality it was a metallurgical engineer named Don Frey (who actually got on quite well with Enzo Ferrari and won his respect). Not quite as exciting as seeing the famous Iaccocca almost closing the deal.

The movie also takes liberties with Ford’s pursuit of the Ferrari company, which they almost got. At least, if you believe the movie. Contrary to the movie’s portrayal (an Italian photographer tips off rival Fiat about the impending deal, and they swoop in and swipe Ferrari out from under Iaccoca), the reality was that Enzo Ferrari knew his company was an Italian institution. He would never really have pulled the trigger on selling the quintessential Italian company to an American institution, just as Henry Ford II would never have sold Ford Motor Company to Volkswagon or Volvo.

One dramatic moment the movie did get right was the insulting rejection by Ferrari of Ford’s offer. Ferrari’s chief adviser at the time confirms that Enzo Ferrari’s response was much less than cordial, insulting everything about Ford – their executives were “worthless sons of <can’t say it in front of the kids>” who managed a “big ugly factory that made big ugly cars” for a “pig-headed boss” who was not near the stature of the great Henry Ford. Yeah, you can understand why that would have motivated Henry Ford II to take some action.

Carroll Shelby, Henry Ford II, and Enzo Ferrari are three of the four major driving characters of the movie and the real-life story. The fourth is British racer Ken Miles. Those who knew him confirm that he was pretty much in real life as he was portrayed in the movie.

Where the movie takes some poetic license is in some of the smaller events and exchanges that, together, work to amplify the drama of the movie as it builds towards its climax. For example, the design and testing process of the Shelby-led crew led to them testing dragsters at LAX in an airport hangar. The movie portrays the Ford corporate schlubs insisting of some new-fangled computer system being used to test for drag. Miles gets frustrated – this new technology ain’t any use to him, and he rips it out of the car. He wants to use their tested-and-tried method: bits of string taped to the car that can be eyeballed to show evidence of aerodynamic drag.

It’s a nice dramatic moment, but the reality was less dramatic. Shelby, Miles and the team actually used both old school and new school methods together. Miles and the Ford engineers weren't at odds. The computer gathered information on things like internal air pressure and temperature, while the strings told them what they needed to know about exterior and exhaust drag.

The story wouldn’t be what it is without the charismatic driving force (and design genius) that was Carroll Shelby. Shelby was an accomplished racer in his own right who had been forced to retire due to a heart condition (for which he's popping nitroglycerin pills throughout the film). The movie shows Iacocca seeking Shelby out, showing up at his workshop with a blank check and an interesting offer about beating the Italians.

The reality is a little flipped…..Shelby was the one who approached Iacocca about the project. No blank check was involved – Carroll Shelby already knew what it would take to get the job done.

Despite taking liberties with certain events and relationships, one thing the movie doesn’t sugarcoat is the danger and drama (and the carnage) of the race itself.  It’s true that there were multiple accidents that knocked seven cars out of the race. And a great many more didn’t finish because of equipment failure. A lot can happen in a 24-hour period, after all.

The Ford car did have its share of technical problems that added to the drama in the movie. Miles slammed his head against the door (luckily, he had his helmet on), which bent the door and kept him from being able to close it properly. There’s also a dramatic subplot about brake issues in the movie - also true in reality. The Ford team takes the dramatic step of replacing their entire front brake rotors. In the movie, the Ferrari team is protesting robustly, but in reality, people may have been shocked by the gambit but the objections were not quite so vocal.

James on Engines - Classic vehicles and Diesel Fuel
The History of the Lamborghini
The Life and Mysterious Life of Rudolf Diesel
Still driving a 1998 Camry? You could have a classic car