Hard to believe that one year has passed since Hurricane Sandy took the Northeast by surprise. Back on October 29th, 2013, we published a blog post on preparing for the storm (we called it "Frankenstorm"), but we can't say that even we anticipated just how big and devastating and life-altering the Storm would be. 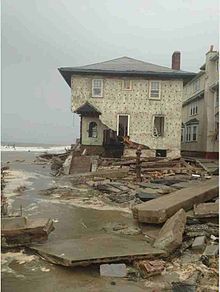 Now that we're one year on, the boroughs of New York and areas of New England are taking stock of what happened, trying to learn lessons from their experiences to make sure the worst elements of the storm's aftermath are not repeated.

One of the worst memories that residents of New York and New Jersey had was simply trying to buy gas. Most, if not all, gas stations operate with electric fuel pumps. When the storm knocked out power to large swathes of the Northeast, these stations had no way to dispense gas even if their storage tanks were full of fuel.

This caused a ripple effect of huge lines and waits at the stations that could manage to dispense fuel.  Lines at such stations literally stretched for miles, and nobody likes waiting hours to get fuel anyway.

So how do you solve a problem of people not being able to get fuel because of power outages?

If you're the Federal and state governments, you pay for generators. The state of New Jersey just announced on October 21st the distribution of $7 million in grant money to about 250gas stations in the state that were left without power after the storm. If these stations could have dispensed fuel, the gas lines stretching for hours would have been much much shorter. So making sure as many stations as possible have the ability to get fuel to needy consumers will head off this problem in the future.  At least, that's what they're hoping.

Some experts, however, disagree with this approach and take a more unique line. They maintain that a big part of the problem was people who were buying gas they didn't need - or rather, taking too much fuel from a limited supply. If you don't know when you'll be able to get gas next, the temptation is to buy as much as you can for your cars and generators. If everyone is doing this, you get gas shortages and all the problems that come from that.

But what if everyone just bought gas only when they needed it and only how much they needed?

It's tough to overcome the temptation to limit such a purchase, which is why these counterintuitive thinkers propose a solution that most people find extremely distasteful.

Do Away With Anti-Gouging Laws

More politely, stop imposing artificial limits on how much people can charge for gas. The first reaction is to say "hold on, that's not fair". And we'll admit, we weren't crazy about the idea at first, either. But it's supposed to work like this. If there's a gas shortage and gas still costs the same as it always does (through laws that artificially limit how high gas prices can go in certain situations), and everyone can buy what they want, you get people buying as much as they can, as often as they can. It's human nature.

But what if gas cost $7.00 a gallon? Or $15.00 a gallon? Would the same people fill up every container they had with fuel, not leaving enough for everyone else? Of course not. They would buy only what they realllly needed, leaving more for everyone else who need it just as much as they do.  When gas is expensive, you think twice about whether you really need to buy it.

Realistically, though, that's probably not going to happen. The idea of allowing someone to profit "excessively" in such a situation is a tough pill to swallow. It smacks of unfairness. Even if it's just ever-so-possible that it might actually have a positive effect.