Maintaining a Gas Generator: Do this one thing to protect your investment 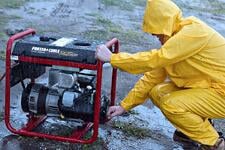 There are thousands of small gas generators around the country, purchased by households and businesses who need emergency power to run appliances and machinery if, god forbid, the power ever goes out. In Florida, after the string of hurricanes in 2004-05, generators became a very popular thing.

But the proliferation of ethanol gasoline can raised concerns among generators owners that their $1,000 investments are at risk for damage by the fuel that's left sitting in them during the long periods of non-use. And not just the investment is at risk, but the other investment of the things the emergency power is trying to protect.

Fortunately, there's a pretty simple fix to head off these issues. When you're done using the generator, or done with any periodic test running of the unit, switch off the shut off valve. This will prevent fuel from settling in the fuel system of the generator and will provide protection for parts of the unit that might otherwise be attacked by ethanol gasoline. You should also do this any time you are transporting the generator.

This is important to do, also, because it reduces the chance that the carburetor inlet needle will unseat.  When this happen, fuel can enter the crankcase and dilute the engine oil.  Severe engine damage awaits the unsuspecting generator operator who is not aware of this happening.

If you intend to store the generator without use for more than 2 months, you may want to consider the following steps for maintaining your gas generator: