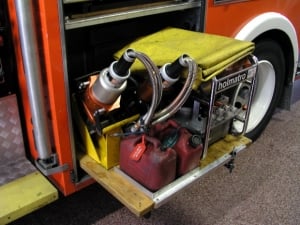 A large consumer service company here in central Florida has a fleet of over 100 trucks, all of which include a gas powered generator.  These generators are used to provide power on site as the service crews travel the area solving their customers' issues.

The problem this company had is a common one, water accumulating in a generator's fuel. Generators usually sit idle for a period of time and then an urgent situation arises where emergency power is needed.  Hard earned experience comes from knowing that water accumulation in fuel will cause a generator to fail when you need it most.  This company's trucks and generators were stored outside, and even thought they were covered, they were still exposed to condensation and humidity.  Water, once in the fuel, causes corrosion of carburetor parts as well as rubber and plastic fuel lines.  Particulate matter from this corrosion then circulates in the fuel system and clogs fuel nozzles creating a situation where the generator fails.

The service company was experiencing on average two generator failures per week.  A generator failure required the truck to be brought into the repair facility causing scheduling and customer service interruptions.  In total the downtime and repair expenses caused $24,500 in costs to be incurred to fix the generators.  This does not take into account appointments missed and delays in customer service appointments.

Bell Performance was consulted and asked to formulate a solution to the problem of water in fuel causing generator failures.  The solution we recommended was to add Ethanol Defense to the central fuel distribution system for the service trucks and generators.  We also recommended that the customer add a small amount of Ethanol Defense to each generator each time it was refueled.

The chemical ingredients in Ethanol Defense include multiple water-control agents: both a water absorber (to bring lock the water into phase with the ethanol fuel blend) and a surfactant, which changes the surface tension of the liquids and promotes the formation of a water-fuel emulsion. This process encapsulates the water into tiny micron beads and allows it to safely pass through the injectors and combustion system without causing any ill effects. This secondary process is called a micellation process and is, combined with the formula's absorbent technology, the reason why Ethanol Defense picks up and absorbs water better than any other product on the market

As an added benefit Bell adds an injector cleaner component which, along with the tiny beads of steam/water suspended in the fuel, cleans the fuel injectors.

The immediate results was that the failure rate went to zero.  Not one generator has failed since this procedure was adopted by the service company.

Total cost to the service company for a six month period was $620.00 for a return on the solution of over 39 times the cost.