Today, Bell's on-staff master mechanic James Dunst breaks down mechanic issues in your car that could be related to getting good gas mileage.

If you were to keep track of your car's mileage from the moment it was new, it would not be uncommon to see your fuel mileage drop as the miles on your vehicle increase.  Let's talk a little bit about the part of your engine that contribute to worse gas mileage, and what you need to know about them.

A car's engine and fuel system are complex systems.  To keep it simple, there are three engine components that can be assigned the most blame for this fuel mileage reduction.

All modern vehicles have an Oxygen Sensor that the vehicle's onboard computer uses to determine what the airfuel ratio actually is when the mixture reaches the exhaust. What the Sensor and the computer are trying to do is not get the best gas mileage, but the cleanest emissions for the environment. 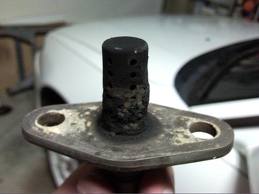 An Oxygen Sensor works by generating voltage up to 1000 millivolts, which the vehicle computer interprets. This voltage generated is ideally 500 millivolts if the post-combustion fuel-air mixture is the right mix of fuel and air.  But if that mixture is off, the Sensor's voltage will be too high or too low.

If the computer sees a voltage reading above 500 millivolts, it reads that the fuel mixture is "rich" - too much fuel, not enough air. If it sees a voltage reading below 500 millivolts, it reads the fuel mixture as "lean" - not enough fuel and too much air. The function of the computer is to keep the voltage reading at 500 millivolts, which is the ideal air fuel ratio needed to achieve both good fuel mileage and good catalytic converter operation (remember that the catalytic convertor is there to help clean up the emissions before they go into the atmosphere).The computer will change the rate at which fuel is metered into the engine, increasing it or decreasing in order to get that fuel-air mixture back to the right balance.  If there's too much fuel leaving the combustion chamber (a rich mixture), the computer's going to cut back on the amount of the fuel it's giving the engine, in order to bring that rich mixture back to normal. Conversely, if it reads the fuel-air mixture as not having enough fuel (a lean mixture), it's going to inject more fuel in order to bring it back to the optimal reading.

As the vehicles gets old and the mileage increases, the Oxygen sensor starts to get a carbon build-up from the byproducts of combustion that it is reading. As this build-up occurs, the oxygen sensor is not able to properly report the air-fuel ratios through voltage generation and the computer does not react as it was designed - it misinterprets what's really going on and adjusts the fuel injection improperly.  This leads to a drop in your gas mileage.

The second component that has a negative effect on fuel mileage is the Exhaust Gas Recirculation Valve (EGR). This is an emission control device that aims to control the emissions known as Oxides of Nitrogen (NOx). NOx emissions are bad for the environment and are a major contributor to pollution and poor air quality.

The EGR Valve functions by allowing exhaust gas to be circulated back to the engine.  The exhaust gases enter the intake manifold at certain times, with the purpose of  richening the air-fuel mixture. This has the effect of lowering the temperature in the internal combustion chamber temperature below 2500 degrees F. When you have temperatures above this point, NOx gases can be formed. If the temperature is below, they don't form.  So you want to lower the temperature to prevent these harmful gases from forming, and so they invented the EGR system to help do this.

EGR Valves are never supposed to operate when the engine is cold, at idle or during wide open throttle. They always operates in between these three points.  Similarly to what happens with the Oxygen Sensor, over time as the EGR Valve is exposed to more and more exhaust gases (which have unburned fuel in them), byproducts of combustion will build up on the Valve and may  cause it to stick partially open, leaking exhaust into the intake manifold when it's not supposed to be there. Exhaust leaking into the intake manifold continually which will have a negative effect on your fuel mileage and will also cause drivability issues for the vehicle.

The third item affecting fuel mileage is dirty fuel injectors. Recall that the injectors are constantly spraying fuel into the combustion chamber.  Over time, the gasoline evaporates off

a fuel injector (such as when you shut the engine down after you're finished driving) and leaves a residue behind which eventually will build up and interrupt the spray pattern of the injector.  This injector deposit causes the fuel to drip or dribble instead of spraying, and this always causes an incomplete fuel burn - the engine wants to work best with a nice fine spray of fuel, not a dribble. You can probably guess that this situation causes a reduction in mileage, higher emissions, and drivability issues.

What To Do About It

Treating your fuel with a good fuel additive that contains detergency (such as Bell Performance Mix-I-Go and Ethanol Defense for gasoline, will give you the benefit of cleaning and keeping clean these essential Oxygen Sensor, EGR Valve and Fuel Injector parts.  When these components are clean, the engine continues to work as if it is new, and the mileage you experienced when your vehicle was brand new can be achieved once again.