Another birthday for our great nation! We are all blessed to live in the richest and most properous nation in the history of our planet.  We have the freedoms we do because of the sacrifices of our veterans, the work of those who built our nation with blood, sweat and tears, and not least of all, because of the lives sacrifices by the men and women of the 18th century American colonies who paid the biggest and ultimate price to secure our nation's fledgling freedom from the greatest military power of the time.

We've had more than one inquiry, through this blog and through contact with our main office, about some new advertising from Shell Oil talking about E15 and ethanol gas made from sugar cane imported from Brazil. According to Shell's web site (and as mentioned in their TV commercials), Shell has established a partnership with Raizen, one of the world's largest biofuels producers and a company based in Brazil.  Shell's commercials allude to the idea that Shell is either currently or is planning to be importing ethanol made from Brazilian sugar cane into the United States for use in our nation's gasolines.

It doesn't seem that many folks know about this because the shock waves of dissent haven't yet rippled across the sea of public opinion.  Shell already dodged one bullet when, earlier in June, the partner company Raizen scrapped a plan to buy ethanol from farmers who had encroached on lands owned by indigenous minority people in Brazil.  This bullet might be a little harder to dodge, however. 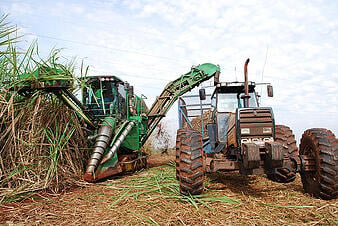 Ethanol's big selling point to a skeptical US public was always its homegrown nature - ethanol produced by US farmers making it a renewable American fuel to help us cut back on all the oil imported from the Middle East. But what happens when the public realizes that a portion of this ethanol is being purchase and shipped in from out of country? How big of a portion? The Raizen deal shipped in just under 150 million gallons in 2011, just over 1% of all the ethanol gas used.  But that's just the beginning. Raizen expects that to double this year in 2012, and imports from a long-term standpoint are expected to rise 20-30% (in part due to a strong US dollar).

This fact is going to make the jobs of ethanol lobbying groups more difficult than usual.  Maybe the only worse news might be if people found out Shell and BP were importing ethanol from Venezuela and Iran.  At least Brazil is a favorable trading partner for us.

Some folks have asked if Brazilian ethanol from sugar cane is better than US corn ethanol.  Brazil has been making ethanol from sugar cane for years and are very very good at it. The same people who ask about Brazilian ethanol being better than ours have asked why we can't just grow sugar cane and make the same thing. The reason Brazil is so good at making ethanol is simply because they get more sunlight than we do.  Brazil's ideal position near the equator gives them maximum solar exposure to the sunlight energy that is stored by nature in the sugar cane plant.  Converting that sugar cane into ethanol is simply a process of unlocking solar energy and turning it into chemical energy that can be burned in engines.

But apart from environmentalist calculations of environmental impact and carbon foot prints, ethanol is ethanol.  15% ethanol made from foreign sugar cane is going to be exactly the same as 15% ethanol from Iown corn. It still causes the same problems. It doesn't matter where it came from. Shell is just inexplicably trumpeting their alledged environmental friendliness and hoping that US national pride waits long enough to catch up for them to make a few bucks before the tide of public opinion shifts to a stormy weather forecast.