This month of February is shaping up to be pretty busy for Bell Performance's nearby home town of Orlando.  This year, they host the NBA All-Star Game in a couple of weeks, while the Great American Race, the Daytona 500, is taking place the same weekend (which means lots of racing fans staying in Orlando and driving 45 minutes up the road to the race).  Word is that virtually every hotel room in the city is booked up at that time, and that's no small feat because the Orlando metro area has more hotel rooms than New York City. 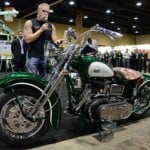 Earlier this week, Orlando hosted the annual National Biodiesel Conference.  The largest gathering of biodiesel professionals, suppliers and producers showcased the latest news and trends in the industry.

No doubt, some of the topics of discussion involved the changes in federal tax policy for renewable fuels (the ethanol credit expired at New Years), advances in producing better and cleaner biodiesel fuels, and how to better get the word out about the important role of biodiesel fuel in reducing emissions in smog-choked cities across the country.

And as usual, there were some interesting show pieces, including a bike built by Paul Teutel Sr. of Orange County Choppers.

As reported by the Tribune News Service, they started with a three-cylinder diesel engine and built the bike around it, making the necessary adaptations as they went.  The end result was a styling bike that would sure to turn heads, without anyone knowing that it really runs on biodiesel often made from leftover fats that would have been discarded elsewhere. And biodiesel proponents (of which there were plenty at the conference) will be quick to tell you that biodiesel blends like the fuels powering this kind of bike are an essential part of our country's ongoing energy policy.

They also had a Ford Super Duty pickup truck on display that set a speed record last year in Utah by topping out at over 180 mph.  And that's with running on biodiesel made from soybean oil.

As a renewable fuel, biodiesel doesnt get quite the press and news coverage tha ethanol does.  That's because we don't have as many small diesel cars and trucks as they have in other parts of the world like Europe.  But as times change, as gas prices go up and not down, and as consumers feel the pinch of fuel costs in their wallets, then the money-saving mileage of diesel (over 50 miles to a gallon, many times) will likely spur sales of diesel vehicles higher than ever.  And that's a good thing for the biodiesel industry and the attendees of this year's National Biodiesel Conference in Orlando, Florida.