The diesel engines of today are predominantly common rail systems. If you understand how these engines are different  from the old school traditional diesel engine designs, you get a better understanding of how important it is to keep the injectors clean so they can function optimally.

Understanding how the old engines worked 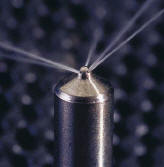 Understanding the common rail injection design starts with understanding the basics of mechanical fuel injection and how that changed in the newer systems. The old school “mechanical injection” systems worked by having the fuel pump supply fuel to the injection pump, where it would be pressurized and sent out through a hard line to the injectors at the cylinder head.  Now the injector is receiving a pressurized portion of fuel that opens the pintle inside the injector (b/c of its pressure) and allows the fuel to be delivered through the nozzle and into the combustion chamber.  If everything is working as it should, the fuel will be delivered in a very fine mist.  All in all, the fuel pressure in these conventional mechanical systems will be around 1,800 to 3,000 psi, which is the amount of pressure needed to force the injector pintle open.

The downside for this kind of system is that the amount of fuel that would be supplied to each injector was pre-determined beforehand. Whatever was sent to the injector pump is what the injectors got.  Still, for a long time, this system seemed to work fairly well. Diesel engines last a long time and are relatively efficient.

It was only a matter of time, however, when someone came up with a better way.  That way is the common rail injection system. It’s made today’s diesel engines light years ahead of even the best diesel engines of the past.  They start with pumps, fuel lines, injectors, and a fuel rail that all deliver and work with the fuel at much higher pressures than the old mechanical systems did.

The high pressure pump supplies fuel, where it is pressurized to 5,000 psi. So we’re already starting at a much higher pressure.  In fact, a common rail design engine won’t even fire if the pressure isn’t at least 5,000 psi – that’s the minimum pressure needed just to idling. The computer thinks something is wrong if it doesn't detect such a minimum pressure.

Now the fuel is delivered to the high pressure fuel rail.  This is the unit that will deliver the fuel to the injectors. The vehicle’s computer (in conjunction with other components like sensors and actuators) coordinates the entire ensuing dance of telling the injectors when to open (and for how long) and how much fuel (and when) to supply to the injectors.

With a common rail diesel engine, you could be looking at injection pressures as high as 28,000 psi.  It doesn’t take an Einstein to infer that there’s a big difference between 3,000 psi in a mechanical system and 20,000+ psi in a common rail system.  And the rule of thumb is that the higher the pressure of delivery for fuel, the more efficiently it will burn. Not to mention the common rail engine’s ability to inject fuel as many as 4-5 times in a single piston power stroke, depending on what the computer detects needs to be done.  This kind of specificity was never remotely possible with the old mechanical injection systems.

We say all this to bring us back round to the point that it’s more important than ever to keep those diesel fuel injectors clean.  So using a good diesel fuel injector cleaner is a good idea. There are many options out there, between single-tank cleaners that you use once in a while to multi-function "keep clean" additives that combine injector detergents with other active ingredients in a formula that’s designed to be used on an ongoing basis.  These ongoing additives are also priced to be more cost-effective to use.  And one other advantage of using these kind of detergent packages is that they will remove deposits from all the areas that the fuel touches, not just injectors. So you clean your entire fuel system.