The changes to contemporary diesel and biodiesel fuels have created a huge need for fuel biocides to treat and protect those fuels in storage.  Fuel biocides are an essential weapon to kill microbes and keep away the problems they cause. And across the nation, fuel professionals are checking their fuel storage tanks (tanks they may not have checked for years) and only just scratching the surface of the problems therein. They're finding big problems with microbial growth infecting the tanks and the stored fuel, and they're searching for solutions to fix them.

So the question is, which solution to choose? A biocide is the only thing that will kill and get rid of microbes in fuels and tanks. But not all biocides are the same and there are major differences in performance that are important to consider.

Pri-ocide and Aquatreat (trade name Aquatreat DNM-30) are two biocide trade names easily found in the marketplace. They both utilize a type of chemistry called carbamate.  There are other biocide product names that utilize the same chemistry, but Pri-ocide and Aquatreat are two of the most well known. Pri-ocide is distributed by Power Research Inc. of Houston, TX. Aquatreat DNM-30 is distributed by a network owned by Akzo Nobel, a gigantic worldwide company.

How To Know What's The Best Choice

Trade names don't mean anything to people (and they shouldn't). They're not experts and have no reason to think one is better than the other. At the same time, just because something is well marketed or you've heard about it more often than something else, neither one means it's actually any good. In order to make the right choice, you have to know what makes a good biocide over a bad one.  You should look for these characteristics:

Resistance to pH changes - The best biocides will work equally well in both acidic (pH < 7.0) and basic (pH > 7.0) environments.  This is important because fuels and liquid with severe microbial contamination will tend to be acidic, due to the acids produced by microbial respiration as they grow and thrive in the liquid.

Effectiveness in both fuel and water phases - Especially important when using biocides in stored fuel. The presence of a water phase (a layer of water under the fuel) is always associated with microbial growth because microbes need the water phase to grow and thrive.  Some biocides react with water, degrading their active ingredient ("biocidal ingredient") and reducing their effectiveness.  These biocides would not be ideal.

Let’s compare the carbamate chemistry (and these two products) to Bellicide (the biocide from Bell Performance) with respect to performance in these critical areas. 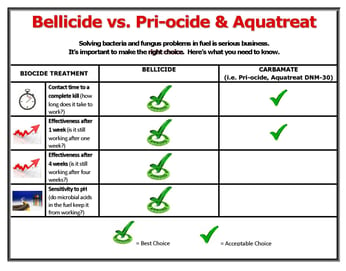 Sensitivity to pH – Bellicide is one of the least sensitive biocide chemistries to pH levels of fuel or liquid.  Carbamates like Aquatreat & Pri-ocide can tend to lose effectiveness in more acidic environments, making them less effectiveness in the presence of severe microbe problems in fuel.

Effectiveness in water phase – This is not listed on the infographic but should be commented on. Bellicide and Aquatreat/Pri-ocide are all effective chemistries in the presence of water.  This is not the case with every biocide. Some biocides react with water, reducing their effectiveness.

Which biocide is most effective at killing microbes?

Because the purpose of a biocide is to kill microbes, it’s important to look at how effective they are at killing fuel microbes and maintaining a microbe-free environment for as long as possible. We can see some interesting things if we look at some comparative kill studies using different treat rates and different strains of microbes.

The summary of the data involves both kind: Bellicide (the blue) killed everything, in both microbes, even at the lowest treat rate, all the way through the full 4 week period. Pri-ocide and Aquatreat were markedly less effective - you had to use more and still got subpar results.  Even to kill 50% of the fuel fungi, the kill study used 2-3 times as much (200-300 ppm). And even at the maximum 300 ppm treat rate, neither Pri-ocide nor Aquatreat could keep killing for four weeks, whereas Bellicide still killed 100% of fuel microbes in that time.

These results should be clear - Bellicide is the better biocide choice.

Note: all product names are registered trademarks of their owners.