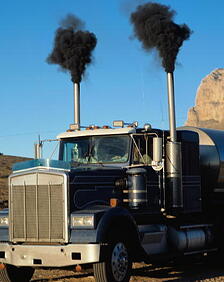 Carbon buildup is a bigger problem in diesel engines than it is with gasoline engines. Why is that? One reason could be the Federal requirement for certain detergents to be added to gasoline at the refinery. That keeps the carbon load down in your car and is better than nothing (which is what diesel fuels have, with respect to added detergency), though that's not to say there's enough detergency in gasoline to keep everything completely clean for the entire life of the car.  Diesel engines don't get that benefit.

Is It The Fuel or The Oil?

Some blame excessive carbon buildup on oil getting into the intercooler and intake pipes. For this issue, the home mechanics recommend installing an oil catchcan. But even that solution is disputed out in the internet community.

What do other authorities have to say about it?

One culprit being assigned blame are direct injection systems.  As vehicles have moved toward direct injection, mechanics are seeing more carbon buidup in the engine. The carbon builds up around intake valves and erodes whatever performance or mileage gains the engine gets from having direct injection in the first place. How much of a loss? Studies have been done on diesel cars taking newer vehicles (starting at 15,000 miles) and comparing the horsepower of the vehicle at that point and then with another 5,000 miles added (along with the intake valve carbon deposits). At 15,000 miles, the cars had 324 "all-wheel horsepower". 5,000 miles later, the horsepower was measured at 317. Another 5,000 miles and the horsepower was all the way down to just 305. That's a drop of almost ten percent in less 10,000 miles.

What to do about carbon deposits in diesel engines?

Go onto a diesel drivers message board and ask a question about preventing carbon buildup, and you'll get some interesting answers. One board we saw advocates flooring the engines 10-15 times a day if the diesel engine is a car or light truck. The logic there is that it closes the EGR valve at full throttle. We're not sure how feasible that is if you're driving in the city, and it certainly won't help your gas mileage.

The best thing you can do to keep your diesel engine clean and free of deposits is to use a fuel treatment with detergency.  Diesel fuel has no requirement to come with detergency, unlike gasoline. You can use a "keep-clean" detergent, but you'll also get excellent results if you choose an every day treatment with each fillup.

Apart from your driving behaviors, keeping the engine clean is the single best thing you can do to preserve the optimal functioning of your diesel engine.