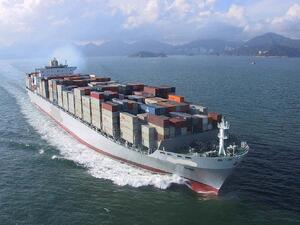 Large ships, whether transport or cruise ship, typically burn some designation of heavy marine fuel oil that is close to or equivalent to the heavy fuel oil that power plants burn. The terms “Marine Fuel Oil” (MFO) and "Heavy Fuel Oil" (HFO) typically are equivalent to this.  Because this is the “residual” fuel oil left over after the gasoline, diesel, natural gas and other light (and more expensive) fuels are refined from the crude oil, this heavy fuel oil is cheap and packs a lot of energy punch (because the heavy molecules contain longer carbon chains than gasoline or on-road diesel).

The downside to these heavy fuels is they contain high levels of metal and non-carbon contaminants like sulfur, vanadium and calcium.  These elements can cause harmful corrosion over the time on the post-combustion surfaces of the large diesel engines onboard the ship.  This is bad news for the ship’s bottom line.

A cost-effective solution for preventing this kind of situation is to treat the ship’s fuel oil with a fuel treatment containing magnesium, which neutralizes acid formation and helps to break up any buildup of deposits that contribute to this problem.  Power plants used to use a magnesium oxide slurry to inject into their boilers to neutralize this problem.  But a slurry like this isn’t feasible for ships or internal combustion engines; hence the fuel treatment should contain magnesium in a more soluble form that doesn’t settle out in storage tanks and clog fuel delivery lines and injectors.

Bell Performance, the nation’s oldest fuel additive manufacturer, recommends for these kind of ships, two formulations of its popular ATX line of fuel oil treatments – ATX-1004DSC and ATX-1005SSD. Both of these neutralize harmful acid formulation to prevent expensive engine system damage, along with other formula ingredients to provide combustion benefits and keep-clean benefits for the ships’ marine fuel oil delivery system.

IMO Marine fuel regs 2020 - How It Affects Everyone (and that means you, too)
Boat diesel - what you need to know
Marine Fuel Oil Problems and Solutions
Marine Fuel Additives for Commercial Use