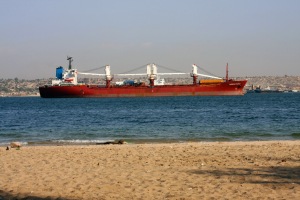 Marine fuel oil (MFO) and marine gas oil (MGO) are the main fuels used in the vast marine transportation sector.  MFO is roughly equivalent to the heavy fuel oil burned by power plants – it’s the heaviest “residual” oil left over after gasoline and diesel and middle distillate/lube oils are refined off a barrel of crude.  The marine industry likes it because it is inexpensive and has a high energy value (due to its composition of long and heavy carbon chain molecules).

Financial competition means that transport ships have to fight for every dollar they can get by minimizing expensive problems and expenses. This includes maximizing fuel efficiency during MFO use and minimizing MFO-related problems for the equipment. MFO is the heaviest fuel used and contains the highest levels of sulfur, vanadium and other in-organic components. In practice, this means soot and deposit buildup on engine surfaces, while the sulfur and vanadium contribute to the formation of acids that can cause expensive engine damage over time.

Many of these problems mirror the same problems that land-based furnace and other fuel oil-using systems face. Hence Bell Performance has develops multi-function MFO treatments to benefit the marine transport industry.  Oil-soluble combustion catalysts lower fuel consumption and clean out carbon deposits from dirty ship engines. Acid production may be eliminated through neutralization both of acid byproducts and also remediation and removes of vanadate ash and deposits that contribute catalytically to their formation.  Surfactant packages that co-exist alongside these other ingredients solubilize and remove the heavy carbon sludge (formed from asphaltene components in the fuel) that will drop out of the MFO and build up over time in ship fuel storage tanks and fuel delivery systems.  All in all, these MFO treatments from Bell are designed to return the ship’s fuel-burning system to a newer, more efficienct state, while realizing tangible cost-benefits for the shipping line.