The 1950s - Another Impossible Barrier Broken

The times have changed and so has the name. Bell Laboratory. Bell Additives. Bell Performance. Three names which have come to signify quality, value, problem-solving and innovation to thousands of consumers around the world over the last 100+ (actually now 104) years. We invite you to sit back as we go through history decade-by-decade and also throw in a few tidbits about what we at Bell were doing while the world was changing around us all.

Think about what used to be regarded as impossible. As mentioned last week, they used to think breaking the sound barrier could never be done. The same goes for the Four Minute Mile. For much of the 19th and 20th centuries, so-called experts maintained the human body just couldn't reach that level of performance. When they started keeping time on the distance in the 1850s, the fastest people in the world were running a mile in 4:40 or 4:50. It took until the 1850s for accurate mile tracks to be built in the first place. Slowly, the best times crept below 4:30 and 4:20 until the first sub-4:10 mile was run in 1931.

But as you get closer and closer to such a lofty goal, it still seems further and further away, because it was so hard to get there in the first place. On May 6, 1952, Roger Bannister was running in a big track meet that was being broadcast live on BBC Radio.  They almost canceled the race because of wind gusts approaching 25 mph. But the winds died down and the race went off and the iconic picture was born of Bannister stretching at the finish line to snap the tap at 3:59.4. It won him a Knighthood from Queen Elizabeth II and Sports Illustrated even created a new award to bestow upon him - their first Sportsman of the Year award.

Diesel fuel gets the Bell treatment 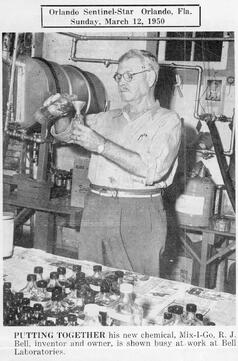 In 1954, building upon almost 30 years of success with his Mix-I-Go formulation, Robert Bell developed a similar formulation to address fuel-related problems for the diesel fuel user.  He called his formulation “Dee-Zol” and it is a name that is still sold and used today.

Bell’s Dee-Zol formulation capitalized on some of the revolutionary technology he developed to be included in the Mix-I-Go formula for gasoline. This provided diesel consumers with combustion improvement, a detergent to keep their engine clean, and surfactants to suspend the built-up water in the diesel fuel. A lubricant, dissolved in the fuel, provided the consumer with added lubrication for their injectors and fuel pumps, increasing the life of their engine and equipment. The death of Robert Bell in 1957 left his widow Mary Bell administering the company.

During the Swingin’ Sixties, how did Bell Laboratory manage after the founder Mr. Bell's death? Next week we’ll look at this decade and what it meant for then 50-year-old company.

Did you know.... the picture to the right was taken of Robert Bell by the local newspaper, the Orlando Sentinel, in 1950.  That's the same year that the new comic strip Peanuts debuted in 8 newspapers across the country. The new comic with Charlie Brown and Snoopy was actually named by other people for the peanut galley of the popular Howdy Doody tv show. Charles Schultz didn't really like that but stuck with it.