Removing Contaminants From Fuel in 2018: Essential Info for Diesel Storage

Given how both fuels and engines have changed over the last decade, the issue of fuel contamination (and what to do about it) is an essential one to have the right handle on. Those who are in the fuels or operations industry can recognize pretty easily how the fuels of today have changed. They have problems a lot sooner than fuels of the past (like the diesel fuels from the 1960s that the US Army said should be able to get 2-5 years of stored life without any expectation of problems whatsoever).  And those with fuels under their care who haven’t yet recognized how prone today’s fuels are to problems may be in for a very rude awakening this coming hurricane season. 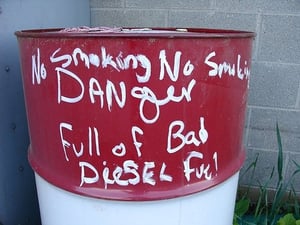 There are three areas of concern when it comes to contaminants in diesel fuel – water, inorganic debris and organic contaminants like microbial products and the waste products of fuel deterioration.

Ultra low sulfur diesel fuel was supposed to be phased in starting in 2006 or 2007. But we’ve only just now reached the point where all off-road diesel (like diesel for emergency backup systems and generators) has to be ULSD as well.   We’ve spent years talking about the message of how ULSD fuels are inherently more prone to developing problems.  Storing fuel for emergency use magnifies the chances of these contaminants developing in diesel fuel.

It’s Not Just About Sulfur. It’s Also About Aromatics

What is it about ULSD that causes these problems? Removing the sulfur involves refinery processing that changed the fuel in fundamental ways. Yes most of the sulfur is gone, but so too are aromatic molecules that help the fuel resist microbial growth. Microbes don’t really like consuming aromatic components of fuel.  If you take those out, you leave more of the components that microbes do like.

Today’s ULSD fuels also attract water like never before, due mostly to increased paraffin levels and the blending of biodiesel.  How much of a difference do we see in this regard? Older diesel fuels used to be able to hold up to 50 ppm of water in them as dissolved water.  The extra processing and blending of biodiesel has raised this ceiling to closer to 275 ppm.  And when the temperature changes, this formerly-dissolved water drops out of the fuel as free water, which creates a party for microbes.

The high tech engines of today cannot tolerate fuel contaminants to any appreciable degree. If you look at fuel cleanliness requirements on the ISO level, there’s a 1000-fold difference in the requirements of diesel fuel pump manufacturers of today vs. yesterday.  These system are so sensitive to contaminants, particles smaller than 4 microns can be counted as potential wear contributors.

All of this speaks to the need for good fuel preventive maintenance (Fuel PM) practices including fuel filtration to keep stored fuel free from problem-causing contaminants.

All of this means you cannot ignore fuel contamination and expect to come away unscathed.  Removing fuel contaminants (and preventing them as much as you can) is more of a requirement instead of an option.

Check out these related posts on stored diesel: